Due to prudent fiscal planning, the Philadelphia Parking Authority (PPA), became one of the first government entities in Pennsylvania to fully fund its retiree healthcare (OPEB) liability.

Since adopting the PARS’ OPEB Trust Program in early 2018, the PPA has made a series of multi-million dollar contributions which will ensure it can meet all current and future retiree healthcare benefit payments. The PPA had been setting aside monies over time into a general fund account, but then transferred it into a GASB 75 compliant trust so that the assets would offset the liabilities on its financial statements. This move also allowed the Authority to diversify investments beyond fixed income (as permitted under Pennsylvania law) for greater long term investment returns.

“If we promise employees retiree health insurance, we need to be able to pay for it in a way that secures the benefit long-term for our employees, prepares for future healthcare cost increases, and minimizes the impact on our budget and services, now and in the future. By fully funding this liability through the PARS OPEB Trust Program, we have accomplished just that.” 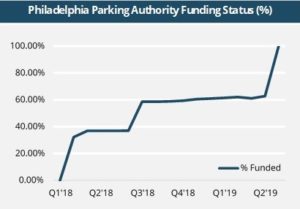 With its 100% funded status, the PPA is far ahead of most local governments which primarily fund retiree healthcare on a pay-as-you-go basis or minimally fund into a trust.

After an extensive due diligence process, the PPA selected PARS, one of the largest providers of OPEB trust services in the nation. The Authority benefits from PARS’ turn-key service model, low fees, ready-to-go documents, and ongoing compliance monitoring. It took advantage of the trust program’s flexible investment offerings, from both Vanguard and U.S. Bank, utilizing both indexed and active investment management approaches.